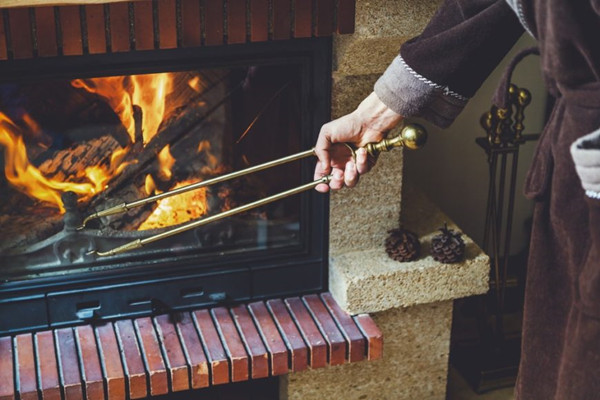 Here's how the same cast iron fireplace tools have been refurbished twice and look as good as new.

When you're trying to restore a cast iron poker set, the first step of the process is to remove the rust. I treat this the same way I do with restoring cast iron pans.

I begin by taking each piece and running it under hot water. I'll use chainmail to scrub the rusty spots on the poker set. Don't use soap on cast iron, only water.

You can also throw the cast iron fireplace tools into a fire which is burning extremely hot. However, don't throw the broom in the fire because the fibers which make the broom will burn off.

My preference is to scrub the rust with chainmail because it's feasible regardless of the time of year or the weather.

Once the rust is fully removed, be sure to wipe it down to remove as much of the moisture as you can. If you can't get all the rust off, it's okay. Remove as much as you can. It might mean you'll have to repeat the process later because of the state of the poker set.

It's time to bring the life back to the poker set. My mother-in-law told me in the past people would use fat and wipe their fireplace tools or any other cast iron item in it to bring the items back to life.

I'm a big believer in doing things as old-fashioned and cost-effective as possible. Therefore, I render lard and use it for many things.

Bringing my cast iron fireplace tools back to life is one of the ways I use lard. I'll take a spoonful of lard and apply it to a napkin or cloth.

From there, I wipe down each part of the fireplace set to add shine. Apply it as many times as needed until the entire set is glistening.

I eventually gave in and put my gloves back on to rub the lard all over the set. When I knew it had been applied everywhere, I'd go back over it with a cloth.

If you see areas of discoloration, be sure to apply the lard there liberally.

Also, if you don't have lard, you can use any oil you have on hand or Crisco. It should all have a similar effect.

When restoring cast iron pans and seasoning them, it's important to place them on a hot stove or in an oven to help protect the cast iron.

This step is difficult with cast iron fireplace tools because it isn't like you can shove them into an oven. I've found it helpful after seasoning a cast iron set to place them close to your woodstove to allow the items to absorb the grease.

However, if you're trying to take care of this job while the weather is still warm, skip this step altogether.

You may notice the poker set develops small batches of rust after sitting for a while. If it does, apply more lard to it.

Between sitting next to the fire and adding enough lard, eventually, the fireplace set should look much better and hold its condition.

My fireplace tools were in a horrid condition. I'll have to repeat the process again later, but my set turned out much better after a solid scrubbing and a liberal amount of oil applied.

The broom in my fireplace tool set had been damaged by the moisture from where it was sitting in an old outbuilding. The bristles were pointing in many crazy directions.

Now the broom not only looked bad, but it didn't function as well as it should. Therefore, I decided to tame the bristles.

I began by smoothing the bristles down as much as possible in the water when I was scrubbing the broom with the chainmail. They were so totally out of sorts to the point my cat was using it to scratch his face.

Once I smoothed them down, I applied some lard during the greasing process mentioned above. After I finished greasing down all the cast iron, I applied a small amount of vegetable oil to try and keep them in place.

It has helped keep the bristles going in the same direction which makes the broom more functional. You could have used oil to smooth them or only lard.

Either way, the broom bristles will require some lubrication to tame them again.

When burning wood, it's vital to have a functioning broom in your set because wood chips and ashes are part of the deal.

Therefore, if you hope to keep a clean floor around your woodstove, you must have a broom which works.

The first time my mother-in-law brought this poker set back to life, she seasoned it well. We didn't have any rust issues after her initial seasoning.

However, with this second go-round, I'm expecting to have to season it again in the future because it sat outside where the elements could get to it for well over two years.

Cast iron lasts forever, but it requires some maintenance. Keep this in mind over the years as you use your fireplace tool set.

It may even be a good idea to season it every year before you put it to use again. From there, set it close to the woodstove to give it some heat for the moisture to evaporate and the lard to soak in.

If you can't remove all the rust and grime with one wash and oiling session, try it again and again. With each cleaning, the set should become more like new. Don't give up on it.

Once you've fully restored your fireplace tools put it to good use. Cast iron is a wonderful investment. It does require special washing, and it also should be seasoned regularly to keep it looking great.

However, if you take care of it, it should last for years to come. I've had another poker set which was metal, and I wasn't nearly as pleased with them as I have been with my cast iron set.

Cast iron is much more durable and can be found for a bargain when someone has mistreated it. Don't ever let rusty cast iron fireplace tools deter you.

As long as each piece is still functional, you can clean, season, and oil it right back into an excellent condition.

These steps will help you take an older cast iron poker set and bring it back to life. It may take a little repetition, but cast iron is a wonderful material to have a poker set made out of.

With proper care, cast iron fireplace tools should last for years and years, and keep you from having to purchase another poker ever again.

We are Cast Iron Fireplace Suppliers. If you are interested in our products, please feel free to contact us.

Previous: Aluminium or Steel Gate : What is Right for You ?
Next: Which Aluminum Casting Method Is Right for You?
Latest News
Navagation
Contact Us