Why Choose a Cast Iron Fireplace? 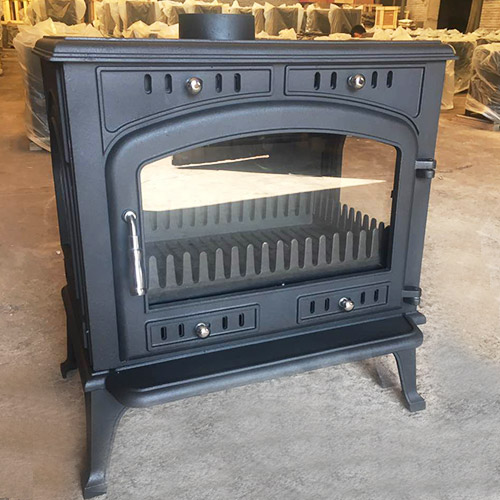 Cast Iron fireplaces are more often than not associated with either the ostentatious, very ornate early Victorian Gothic revival period or the later more subdued architectural influences of the late Victorian and Edwardian period. Late Victorian and Edwardian style fireplaces are characterised by their elongated contemporary linear lines of their design heavily influenced by the work of the Arts and Crafts movement and the then contemporary alternative of curvier stylised flowers, stems and buds, and elegant lines epitomised by the Art Deco and Art–Nouveau design period. Original and reproduction cast iron fireplaces of this period are identifiable by their cast iron hoods raised geometrically sinuous flowers, or elegant sweeping lines, and tile inserts, reflecting a continuous, upwards, and organic movement and growth of natural forms of birds, butterflies dragon flies, flowers, foliage, and even the sun.

The popularisation of the cast-iron fireplace not only marked a turning point in the design of the development of the domestic fireplace but also the accelerated change to the social, political and economic fabric of ours and our forefathers lives wrought by the industrial revolution.  The need for  mass housing to home the growing and now established urbanised workforce led to the requirement of a standardised, efficient fireplace that was at one of the same time both a decorative feature and highly functional. The Arts and Crafts, and Art Nouveau movement tempered the need for an industrially produced product with their dominantly held belief in quality craftsmanship, style, and fine design still found in today’s reproduction cast iron fireplaces.

The larger fireplaces as found in sitting, or living rooms, from the 1800s onwards were in the main made up of two parts. The mantelpiece and its two supporting sides, and the fire insert itself.  The mantle pieces of yesteryear, not unlike today’s  were more often that not made from stone such as marble, granite, slate, limestone or hard and soft woods heightening the sense of luxury, and sumptuousness that the period reflects. The fire insert, the part which contains the fire was commonly made of cast iron replacing the earlier masonry fire chambers.  Smaller cast iron fireplaces where the fireplace and mantel are cast as one were usually found in bedrooms and smaller, less opulent, rooms within the home. The larger one-piece fireplaces, although very impressive and magnificent some would suggest posse a very industrial feel to them.

It is with good reason car manufacturers choose cast iron to produce their engine blocks it provides a long lasting material capable of intricate, precision engineering and the strength and durability to withstand intense heat and pressure.  It is for similar reasons cast iron lends itself to the task of being the material of choice for the ideal fire insert.  First the fireplace or fire insert along with the accompanying grate is cast in the shape it is to retain.  As a consequence the component parts of the fireplace or insert and grate are extremely stable when exposed to the heat of a fire. It will not twist or contort under the temperatures changes it will experience under the life cycle of a fire as it naturally heats and cools.  As the fire insert is cast from liquid iron, poured into three dimensional sand made moulds, this enables complex angles, corners and intricate designs and motifs to be created which adds to both the aesthetics and performance design of the fire insert and grate.  The finished product being cast in one piece, presents itself as a robust unified whole in the absence of any welded seams, which are in themselves prone to fatigue damage, and eventual fracture from the constant contraction and expansion present throughout the fires cycle. Cast iron also posse’s excellent heat retention and conduction properties absorbing the heat directly from the fire to continue radiating the heat back into the living space long after the fire cools.  For hints and tips on cleaning and maintaining a cast iron surround whether fuelled by gas or solid fuel see How Best to Maintain a Cast Iron Fireplace.... and associted articles and blogs found on Fireplace.co.uk Contents by Theme Index page and don't forget to leave your own ancedotes and useful hints and tips 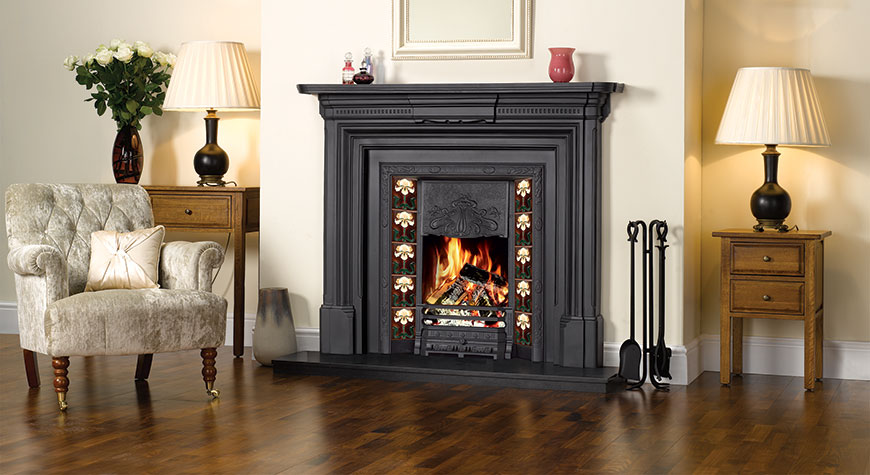 Whether you are restoring a Victorian or Edwardian period property to its former glory, renovating an original fireplace and surround, or wishing to introduce a traditional or much more contemporary charm and focal point to a more modern build there will be a cast iron fire insert, surround, hearth and mantel to compliment your home, needs and lifestyle and fuel choice- gas, electric, fossil fuel, or wood fire.

We are Cast Iron Fireplace Suppliers. If you are interested in our products, please feel free to contact us.